I had always carried my bike either inside my trunk (when I had a massive 1979 Cutlass Salon) or on a bike carrier with very little problems (though once I was asked to pull over so a cop could check whether she could see my license plate through the bike, argh).

But with my Honda Accord coupé with the spoiler I found that my trusty bike carrier would no longer fit.  The spoiler was way too big and after a lot of research I found some bike carriers that would fit, but I really was never much of a fan of putting the bike carrier on the back of the car.  No matter how well you would pad the thing there were slight scratches from it and the concept of strapping something on my trunk  didn’t seem the most secure in the first place.

So for several years I would take the handlebars and seat off my road bike, stuff it in the trunk by turning the handlebars at a near cable-crimping angle and carry it in that way.  It was a pain in the rear but it worked okay I suppose.

When I got my new bike there was no way I was going to disassemble it every time I wanted to take it somewhere.

After a time my riding performance increased and I got sick of riding the same roads near my home, no matter how much father I was riding each time.

I decided to just get a hitch for my car and a new carrier that would go on the hitch instead of trying to put a carrier on the back of the car or the top, or stuff the bike inside.  I picked up the excellent light duty Swagman XC Cross-Country 2-Bike Hitch Mount Rack which came with an adapter for both 2 inch hitches as well as one and quarter-inch hitch receivers (you can find my blog review of the Swagman XC bike carrier in this posting).  After trying it out a bit on my wife Jennifer’s Ford Edge with a two-inch Class II hitch, I decided to take the plunge and get a hitch put on my car; even though I knew that it would involve boring holes in the car, albeit in a place where I nor very many other people would see them 😉

Around here, for some reason, there’s not much choice in places that install trailer hitches.  I considered going to Syracuse and having my Honda dealership put one on, but I didn’t particularly want to drive down there just for that, and it was a bit more pricey than the local U-Haul.

I checked some reviews, asked the opinion of my nephew who is a mechanic (everyone apparently sends their trailer hitch installation to U-Haul around here), and decide to get it done at the U-Haul place.

It turns out that there’s very little that’s simpler than buying a hitch and setting up an appointment on the website for U-Haul’s hitch installation service.

You go to their website (this link takes you to the Watertown U-Haul but you can easily search for any of U-Haul‘s many other places by entering your location in the search box in the top right of the page), enter your car/truck/SUV’s year, make, model, and features and select whether you want the hitch installed at a U-Haul or have the hitch shipped directly to you.

You’ll next be presented with a list of options for the hitch, all of them selected for you.  In my case I didn’t need the ball mount, hitch ball, pin and clip, nor the wiring so I unselected all of those options, but I kept on the selection box for the $5 unlimited lifetime warranty for the hitch.  The little informational pop-up for the warranty explains that U-Haul is going to replace the hitch no matter what happens to it; including rust and accidents.  Seems worth it.

I also was able to pick an installation date, though I read carefully about the shipping information as the shipping prices are a bit hefty if you need the hitch right away, as in next week or something urgent.  But if you don’t need it immediately the shipping is free.  I selected the first future date that would be covered under the free shipping option, which wasn’t long, a week or so.

A simple click to add it to my cart, a payment with a credit card, a quick fill-in of a bit of contact info, and I was all set.  I immediately received a confirmation e-mail telling me that they would call me at some time with more details.

If you’ve ever ordered ANYTHING from a website before you’ll find the process quick and easy and pretty familiar.

As the time got closer a pleasant young woman called about four days before the appointment day to give me an installation time.

She also confirmed that I didn’t need the wiring. Unfortunately the time that they had set up for me was a bit earlier than what I had wanted (7 AM) but the U-Haul employee gave me a few choices for that day.  So I picked 11:15 AM, which was perfect for me.  I guess I wish they had given me the choice of a time right off the bat, unless I missed something on the website; but it wasn’t any problem to change it.

The day of the hitch install I went for a 10K run at the Thompson Park in the morning, got a few lessons done elsewhere, and then got to U-Haul a few minutes early.  They immediately took care of me, having me sign a few papers, and confirming that I didn’t want any wiring.  After the General Manager dealt with another customer he took my keys and went to start on the installation himself.

The other employee showed me to their small waiting area with an apology as to its sparsity.  I had been a bit concerned that I might not find a waiting room there at all and had forgotten to ask on the phone when they called.  I would have to walk back into Watertown and then back out, not a big deal but Route 11/Outer Washington Street in Watertown isn’t exactly pedestrian-friendly until you get down to the sidewalks.

So the sparse waiting room was just fine for me, I didn’t mind as I had brought my trusty Nexus 7 so that I could check my mail and do a little work on a website source.

Less than fifteen minutes later they told me the work was all done.  Even though I had read the installation instructions for the hitch beforehand and knew that it was a fairly straightforward and not too involved process, a couple of bolt holes and some bolts and such – I was still pleasantly surprised at the speed of their work  (and sure, it looked easy in the installation PDF but I really didn’t want to be drilling holes in my own car, I’d let someone else do it).

A little chitchat and a print out of the combination receipt and lifetime warranty (which mentioned keeping it in the glove compartment in case of future need was good advice, which I took) and I was on my way out the door with a ‘have a good day’ or equivalent pleasantry.

The two guys there were certainly very business-like but pleasant and it was definitely a good experience, especially compared to some customer service nowadays, especially around the Watertown area. Sometimes I think we are getting used to bad customer service and are just beginning to expect it or at least are accepting it as normal.

Outside I squatted down and looked under the back of the car to take a quick look at the hitch.

The hitch I got was a Draw-Tite Sportframe Class I 1 1/4 inch hitch.  I assume all the hitches they have are by the same manufacturer but I don’t know this for sure.

The hitch itself was just as the pictures had shown it online, everything seemed to look right and tight – at least to my inexperienced eye.

For my car the tongue weight capacity is two hundred pounds with a two thousand pound towing capacity for the vehicle.  So for my purposes, just to carry a bike, the hitch’s and car’s specs were just fine. 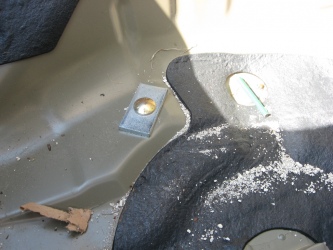 Later back at home I crawled under the rear of the car and inspected it even closer, giving each nut and bolt a twist and the whole thing a quick tug; again, to my inexperienced hand and eye it all seemed fine, tight, secure, with the hitch being light but seemingly generically well-made.

I also opened the trunk, pulled up the spare tire cover and unscrewed the bolt-down for the spare, and tugged it out to take a closer look at the attachment in the trunk pan.  Again, it looked fine to me.

Looking back at the hitch from the outside, the whole thing is pretty well tucked up under the rear of the Honda Accord so it’s barely noticeable.  Which is very favorable to me.

Next I set out to put on the Swagman XC Cross-Country 2-Bike Hitch Mount Rack.

The  Swagman bike carrier came with the two-inch hitch adapter so I had to remove the adapter to use the carrier on the smaller one and a quarter-inch hitch.  An easy few seconds with an allen wrench.  The bike carrier went on easily and fit the hitch well.

Sometimes a little movement or play in whatever is being connected to the hitch can be common, from what I have read from others, from what was present in my previous bike carrier fitted onto the Ford Edge as well as our Highland hitch-mounted cargo carrier/tray (you can find my review of the Highland cargo carrier here).  I added a few small tin shims secured with zip ties to those.  They do make hitch tighteners too.

But once I tightened down the hitch bolt that came with the bike carrier everything was tight as could be, no play and no movement in the carrier whatsoever.  Putting the bike on made no difference, everything stayed tight and secure.  Also see my post Hitch-Mount Bike Carrier Modification/Reinforcement on further stabilizing and securing bike racks.

A fifty mile round trip with the bike on the carrier went perfectly, with very little movement while traveling at the regular speed limit.

So I’m quite happy with the installation process as well as the hitch itself.

My bikes and bike carrier mounted in the new hitch.