The last few years we have been doing a smattering of group riding and so I need to transport my bike via the bike carrier on the car.  And while I am getting my bike ready I usually prop the bike’s rear wheel up against the tire/wheel well of my car or use the home-made bike rack that I built – but I really wanted to try something that just pops open and is easy to store and set up.  Especially for my new bike (review on the way).

So when I was asked to review and critique one I was happy to give it a try.  And ‘critique’ I sure did!

Rock Brothers make some nice frugally priced stuff, that is usually pretty nice for the money.  You’ll find a number of reviews on this blog of some of their other stuff like bike bags, etc.

So I anticipated that this stand would work well and be exactly what I was looking for.

Upon opening the shipping box the stand seemed to be another nice quality Rock Brothers product.  All parts seemed to be tight and nothing was flimsy-feeling.

The stand was wrapped in bubble wrap and had a small tag on it with the title of the product but nothing else. 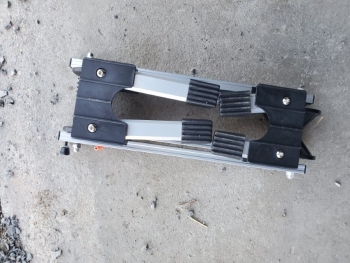 I practiced opening it up and deploying it, then folding it back up again.

Firstly you just pop the four feet out by hand – they don’t lock into place or anything.  For the most part, they stayed in place but as I tried it over and over again, especially later with a bike on it – a few times one leg would swing inward a bit.  Not a big deal I suppose as it is easy to push them out fully extended again.

Then you pop up the vertical part.  You can hold the whole thing in your hands and scissor it open or set it on the ground and bend over and pop the vertical piece out while holding the bottom part with your other hand or with your foot on one of the extended feet to hold it in place.

So far so good.

Next I tried it with one of my bikes.  On the concrete floor of the garage I had to put one foot on one of the extended feet while pushing the bike against the resistance of the spring holding the upright part forward, the spring has a little tension but not a lot; seemingly just enough to hold against the tire to keep it in place.  Maybe outside on grass or pavement where the feet have more resistance to push against a person might not have to hold it all in place with a foot while pushing the bike onto it, but I think you would still have to.

I carefully let go of the bike once it was in place.

I looked at it for a bit, seemingly impressed – until I reached over to touch the bike.

And that’s where it became apparent that the design was flawed.

The bike jiggled back and forth on the stand, alarmingly.  The slightest touch of the bike moved it.

I tested it with a total of three bikes – a road bike with wider tires, a road bike with thinner tires, and a mountain bike; none of them were stable on it.  I wouldn’t even say that one type of bike was better on it than another as they all seemed to be equally unstable.

I looked it over to see if I was doing something wrong but it is ridiculously simple – you open the stand up and push the bike wheel into it and the vertical part is supposed to kind of hold the wheel in place.  While it does this to some extent, at least when it comes to forward and backward motion – there is nothing to hold the tire in place well enough to stop side-to-side motion, within a certain range.  But that is enough range to make it very unsafe with the bike on it.

Perhaps if you are using this in your garage and nothing ever, ever is going to by chance touch it and you are very, very careful taking it off and do not bump it as you walk away…maybe it would still work for you.  That’s a lot of maybe’s and also a lot of being carefuls.  Using it outside where there is wind and unlevel ground and possibly jiggling and nudging from simply putting your water bottle in or something like that is going to give it a good chance of falling over.

You can see in the above photo that the problem seems to be that there is not enough to hold the tire from moving side to side, the tension of the vertical piece is not enough but even if it were, the design of the “double funneled” roller at the top as well as the multi-wheeled-capacity slots on the horizontal piece at the front and the back of the horizontal piece is just not a good enough design to hold the tires in place.

I could think of a few ways to improve it but would require some extra parts that would probably not allow it to fold, or would require a slight redesign.

Here is another one – the Bikehand Bike Stand – that looks like it has a better ‘cupping’ system for the tire to fit into at the back, but still is similar to the Rock Brothers one in the upper piece design.  The legs also do not fold in on this one, but this is minor and maybe a plus also.  There seem to be an abundance of non-folding single bike racks with some being similar sizes and look like they might do a better job, but the non-folding type defeats the purpose of the compact folding and easily-stowed idea.

So, in conclusion I have to recommend against getting this Rock Brothers bike stand.  While it seems to be made well the design itself is flawed for use with road bikes as well as mountain bikes.  I can’t imagine any bike that would be perfectly secure in it.

Needless to say, I am shipping this back to the company and using my normal propping method or my previously-built PVC bike stand.