I probably should have posted this before my “Some Nexus 7 OTG Accessory Photos“, but anyway…

This entry is going to be a bit short.

That’s because when it comes to unlocking and rooting the Google Nexus series you’ll find plenty of resources; websites with instructions on how to do it, programs for quick unlocking/rooting as well as backing up, Youtube videos, what to do after it’s done and things you can do with a rooted Nexus, and how to fix any problems during or after rooting.

Sure, with the Nexus Media Importer you can read data (i.e. photos, videos, docs, etc) off an external devices but you have no write access without rooting.

This was a biggie for me, though not super-important since I had the likes of Airdroid for wirelessly transferring data either way (to and from a computer or other device).

But I really wanted to be able to read AND write data whenever I wanted, without using an intermediary like a computer.  Once I rooted it apps like Stickmount would let me easily do what I wanted to. 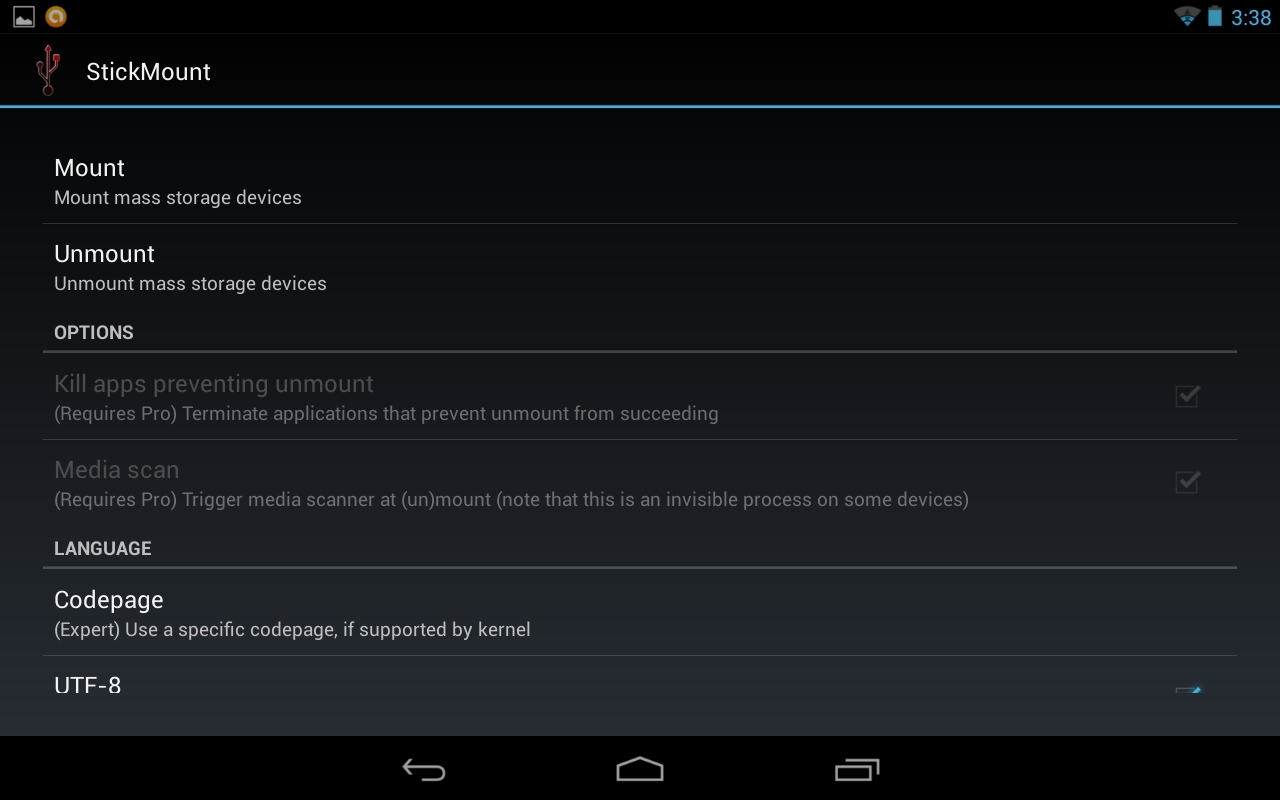 Screenshot from Stickmount (after rooting).

So, what are some of the other things you can do with an unlocked and rooted Nexus (and other Android device)?

You can load custom ROMs, kernels, more effectively back up applications and your device in general, full device themes, better ad blocking, overclocking or underclocking and undervolting, run various apps that can only run or run better with root privileges, remove apps that are ‘built-in’, use game controllers from other machines, and much more . 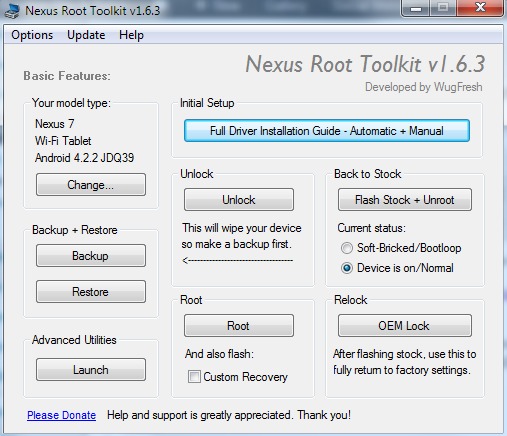 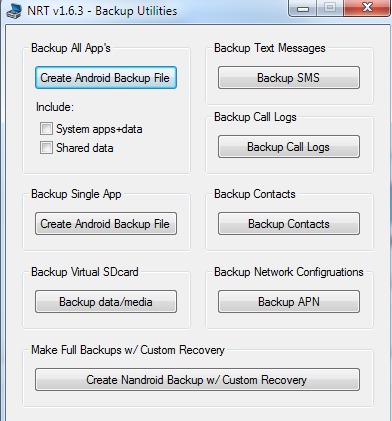 The Backup Utilities portion of the Wugfresh program

The best unlock/root I found that’s highly recommended is the one from the wugfresh website (see screenshot above).

The process is pretty easy, just make sure you follow the instructions precisely and it must be unlocked first, then rooted.  And of course all of your data and configurations will be wiped.  So it’s good to sync everything to your Google Account and possibly backup everything using the backup and restore options that are part of the wugfresh rooting program (see below).

Going to say it again here – rooting it will delete everything on your Nexus that you added.  You  might want to consider doing a root right when you get your Nexus brand new.  If you have an issue you can always use the Wugfresh program to restore everything to the way the factory installed it.

Right now, as of this writing, if you have the 4.2.2 version of Jelly Bean rather than the 4.2.1 or earlier that the wugfresh program is supporting, then you must do a little extra work to add the appropriate files to the rooting program.  Fairly simple.  At some point it will be updated so you won’t have to carry through the extra steps to root the 4.2.2.

For me; I had 4.2.1 and then right after the rooting my Nexus informed me that it had the 4.2.2 update downloaded and ready to install.

Of course the newest version is going to overwrite the rooting process that I just did, but with the help of OTA Rootkeeper I was able to back up the root and restore it once the 4.2.2 update was done.

Viola, everything’s rooted and updated.  There are a few more things to do, just follow the directions on the screen to complete everything.  Installing Busybox   and all.

And, as always, if you have any concerns, fears, or reservations about rooting your device then consider it thoroughly because while this is pretty foolproof and there are multiple methods of recovery – you still run the risk of something going wrong and bricking your nexus in a way that can’t be recovered from; though usually you can with a little work. 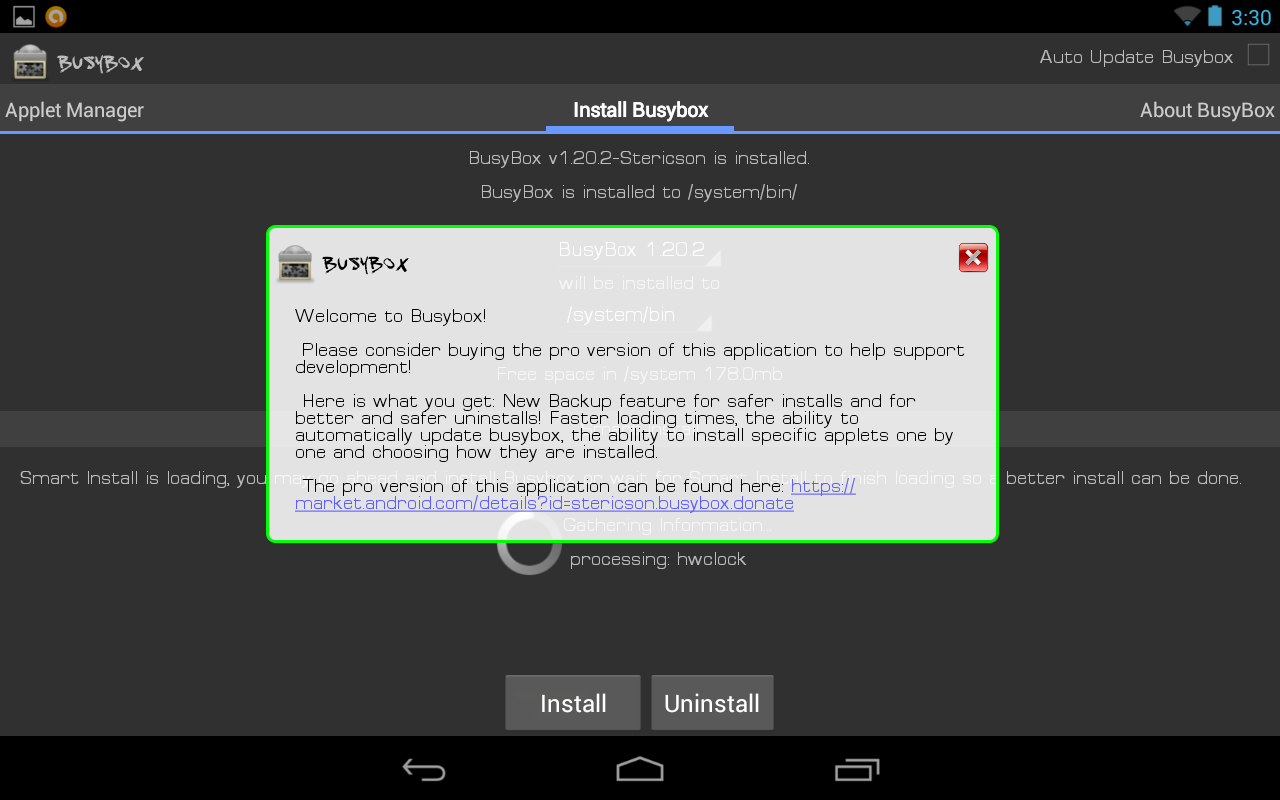