Matt C. over at MobileFun.com was nice enough to send me another mobile accessory to try out – the Gum Rock Bluetooth Portable Suction Speaker Stand.

If you have been following my blog you might remember that I previously had reviewed the FlexiShield Wave Case for the Google Nexus 7 (this link takes you to my review, you can find links to the item itself in the review or click here to go directly to the product page) from MobileFun.com.  Check them out, they have a large number of mobile accessories.

What is a Gum Rock?

So what is the Gum Rock Bluetooth Portable Suction Speaker Stand exactly?

Gum Rock, small flap with the USB and the switch under it

The Gum Rock is a small device that connects to devices wirelessly via Bluetooth 3.0 (it’s also downward compatible with older Bluetooth versions) and plays any audio from any Bluetooth-enabled device and has a microphone so you can use it as a hands-free set.   It works within 35 or so feet of your Bluetooth-enabled device, just like any other piece of Bluetooth electronics.  There’s a suction on the bottom that can be stuck to pretty much anything flat – glass, metal, mirrors, windows, stuff in your kitchen or bathroom or shower or car – whatever is relatively smooth.  It also has a silicone surface that can be easily wiped clean, and the whole thing is pretty splash-resistant.  It can also be stuck to the back of your mobile device and used as a stand while still functioning as a speaker/mike.

The box the Gum Rock comes in is neither fancy nor plain.  It shows a few of the Gum Rocks in a number of colors, and illustrations of various devices it can connect to, and a few specs.  Do you really need a fancy box anyway?  Nah.

The Gum Rock I received is blue, but it’s not an annoying neon blue nor a pastel blue.  It’s a nice dark blue.  There’s a bunch of other colors too; like black, orange, green, etc.

Rock and Gum Rock. The rock is on the left. 😉

I don’t think it looks so much like a ‘rock’ as a ‘knob’ or partial globular device.  In other words – it looks high-tech and futuristic.  Though I can see where the general impression of a ‘rock’ comes from.

The first thing you notice once you take it out of the box is the velvety feel of the silicone covering, which is water-resistant.  Velvety is the best word to use.  And okay, I may have rubbed it across my face momentarily to see just how smooth it felt 😉  And indeed it is very smooth.

At the bottom of the Gum Rock is a huge suction cup (I read a quick review by another blogger who stuck this to his forehead), on the side a little cover can be opened to access the USB charger port and the on/off switch.  On the opposite side are three raised bumps where the controls are.  On the little raised buttons are patterns of a cross, an arrow, and a line.  Not only are these a good visual indicators of what they do but if you’re fumbling in the dark or low light or in your pocket you probably could find which is what using these little bumps, almost braille-like.  I’ll get to what these buttons do later – they have multiple functions depending on what you are doing.  Along one edge is a small pinhole where the hands-free microphone is.

Also in the box is a relatively short charging cable with a regular USB connector on one end and the micro-USB connector at the other for plugging into the Gum Rock.  You probably got a million of these lying around, if you need a longer one.

There’s also a three-paged, double-sided instruction booklet.  The instructions are printed fairly small but I think they are pretty readable, and there are some illustrations.  The instructions themselves are understandable but obviously written by a person who’s second language is English.

After plugging one end of the charger cable into my computer, the other end into the Gum Rock and charging it for a while (the specs say 2 to 3 hours). 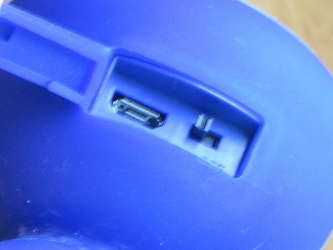 Once it was charged I turned on the little switch beside the USB port (both of which are under the cover, as mentioned above, see photo).

After a moment a tone sounds and the little blue light starts flashing on the bottom.  Have to say – the dispersed bluish light around the bottom of the suction cup is kinda is cool.

What the light is doing indicates various pairing modes.

So anyway…it’s in pairing mode at this point and I proceeded to try various devices.  Pairing goes extremely quickly and simply,probably easier than any other device I have used.  Laptop, desktop, iPod Touch, and Samsung dumbphone (Flight II) all work perfectly through it with no trouble.  Of course, you must know how to turn on and search for Bluetooth devices on your particular piece of electronics.  No security code used.

Playing music is simple, and depends on your device of course.  If you are playing music on a phone your phone should pause the music and let you take the call.

And did I mention?   Real good sound, amazing sound even.  It has a small 40 mm speaker but wow, how do they get such premium sound out of it?  Really surprisingly deep bass, and good treble too.  Of course there’s only one speaker so you don’t get true stereo sound.

It’s pretty loud too, and when cranked it didn’t even distort when playing music from my phone or tablet.  When talking on the phone the lower quality sound of regular phone conversation caused a little crackling at high volume but backing it down one notch on the Gum Rock fixed that.  I didn’t realize how loud it could be and clear too over a distance – while working outside I walked across the lawn to my mailbox and still could hear the song that was being played from across the lawn and road.  That’s a heck of a distance to cover for such a small device.

The knubby buttons on the side work nicely for changing volume and skipping tracks, etc without touching the bluetooth device you are connected to.  The buttons do multiple functions depending on what you are doing with it, for example one button also  lets you answer the phone on the unit without touching anything on your phone.

And I love the blue light on the bottom, if you like a little visual ambiance – well, here ya go.  Perhaps the other colors of Gum Rock have various  colored lights.

It stuck to everything I attached it to, even the shower tiles

The suction cup on the bottom is big, about 1 and 1/7th inches (nearly 5 centimeters).  Which is a plus and a minus.  A plus because it has a lot of suction power on whatever you put it on.  A small minus in that it might not fit on very small surfaces or devices, though it would have to be real small for it not to fit, obviously.  It stuck to windows, my desk, the frig, the counter, my car window, my phone and tablet.  Damn good suction – even stuck to the tiles in my shower!

It takes a few hours to charge, not long – a lot less than a phone for the most part.  The battery maybe lasts 6 hours or so, depending on how much you use it, at what volume, etc.

It also functions as a device stand.  The suction will stick to pretty much any device, though if you have a case with a mottled or textured surface it probably isn’t going to stick to it.  And you can even use it while it’s on the stand, including the controls.

I have to say, this is a good example of the further and continued miniaturization of consumer tech.  I’m a kind of geek (some of my acquaintances may snicker at the “kind of” part) and yet I’m surprised at the quality of the electronics and speaker in this small device.  Technology continues to amaze me, despite my exposure and embrasure of it.  We live in some amazing times.  A few years ago a piece of audio electronics like this would be tinny-sounding and lacking any quality whatsoever.

Great little device, with a multitude of uses.

So if you’re interested in the Gum Rock, or even something like it, here’s the product page and here’s MobileFun’s whole line of Bluetooth speakers.

In case you accidentally dip it in jam, or other condiments – it wipes right off.