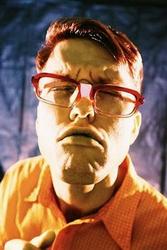 If you have anything to do with computers you probably at least know of Chris Pirillo.  He’s run a technical mailing list and site for many years now.

If you’re a geek or would like to be one and want to share info on a social network specifically by a group of self-proclaimed geeks check out Chris Pirillo’s “Geeks!” social network website. The whole thing is built using Ning.com’s social network-building.

Great site itself, and so is Chris’ use of it – he’s got a massive number of subscribers now.  And it’s all free.  Embrace your geekdom.

Ning.com is worth checking out itself.  You can set up webboards, photo and video sharing, chatrooms, widgets of all kinds, etc.

I like the site, occasionally post there.  But I’m not a big fan of calling people (or myself) a geek – I like to think of myself as fairly well-rounded with many (sometimes too many) interests. 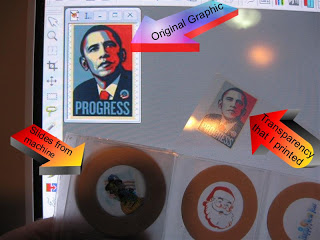 We have this holiday projector thing we got at a local super-store.

It’s just basically a metal cylinder mounted on a swiveling spiked leg to stick it into the ground. Inside the back is a strong halogen light and inside the front is a set-up to hold a round slide, with a lens at the front.  The whole front part can be slid up and down to focus the projection and make it larger/smaller.

It came with all sorts of holiday-themed slides, which are round and inside a pair of cardboard frames.  As mentioned above they fit into the bottom part of the top section and springed legs hold them in place.

It works nice, projecting holiday figures onto any surface.   We haul it out once in a while and project a holiday slide onto the side of the garage.

I got it out last night with the idea of putting the Halloween slides into it, as Halloween is my favorite season.

But ever since we bought the machine I’ve been thinking that maybe I could make my own slides.  I could not only have my custom holiday or special event slides but as an added bonus I could piss off neighbors by making a “Happy Xmas” slide instead of “Merry Christmas”, etc.  You know how some people get so damned upset about using “Happy Holidays” instead of “Christmas”…

As usual I never had the time to experiment with making my own slides.  But last night I got the projector out, wanting to put in a Halloween slide.

Instead I decided to get a projector plastic flimsy out that can be printed on with a bubble jet printer.  Various of my customers and friends do it all the time, but I’ve never had much of a reason to do so before.

I found an Obama graphic from a blog I read, and edited it a bit and printed it.  It printed very nicely.  See above. The shot shows the original graphics, with a few mods.  The slides that came with the machine, and the slide I printed.

I cut the slide and at first made cardboard frames something like the original slides.  When I stuck it in the projector and gave it a try, projecting it on a wall in the house with the lights off to see what it looked like; I was amazed at how well it came out.

Eventually, after some tinkering, I took the cardboard frame off so that more of the picture would show through.  Which also worked well.

You’ll notice the slides in the pic that came with the machine are very similar to slides from old-school slide projectors.  I’m sure anyone who was an adult in the 70’s, or even 80’s, has a bunch of these lying.  As a side-note, you can have slides printed or scanned, or buy your own set up to do it with dedicated equipment or using your existing scanner.  A down-and-dirty but surprisingly-good way is to just haul our your old slide projector and fire it up, and take pics with your digital camera.  Some messing around with your camera’s setting should yield you some pretty god results.  And some post-editing helps too.  Of course, it’s no substitute for doing it in a more ‘professional’ manner if needed.

Anyway, back to my outdoor slide projector project…

I set the device up outside and projected it on the side of our garage.  Wow, surprising how well it works.  A quick walk down the road confirmed that it could be seen for quite a distance.  I then moved it to the front of the garage, as the peak afforded a large projection surface.  This too worked, but couldn’t be seen very well due to the angle of the garage versus the road.  See pics below.

In the first photo above I allowed the flash to go off to show it in proportion to the garage, in the second is just the slide itself on the garage siding.
Firstly, as you can probably see – the slide needs to be repositioned in the device.  An eyeballing problem, as the position in the device has to be guessed at since I didn’t use a frame for the slide.
Secondly, it could be brighter.  Last year the original bulb blew and I have yet to find another 100 watt bulb, what is in it is a 50 watt which seems to be common.  The 100 watt – not so much.  Still looking.
I’m not a super big fan of Obama but, well, the alternative is laughable.  I really don’t want to live in a four-year SNL sketch…  Not that we haven’t for the last eight years already, and look where it’s gotten us.
I’m sure my next slide will be “Congratulations President Obama”.
Anyway…  Now that I know I can do it, and got a few of the techniques down I can print any custom one that I want.
Like I said – maybe an Xmas one.  Maybe celebrate some obscure holidays.  Or maybe celebrate a few “extinct” holidays like the Druid “Mabon” or “Gwyl Awst“.  Or maybe for a few days project an “It’s a boy” sign, then a few days later “It’s a girl”.  There’s endless possibilities.  Something to make the neighbors scratch their heads.

Major Worm Patch
No, I haven’t taken up fishing…  As you probably (should know) MS has shipped a special out-of-season (my phrase) patch for the Windows’ systems.  Sheez…  Major anti-worm patch that stops a worm from exploiting a hole in the security system to execute code.  You can see the bulletin here.
My download worked fine for XP on all the computers here, but the Vista version of the download caused an error message on two computers running Vista.  Not sure why so far but likely having to do with the filename extension and disabled services.
Also, new GIMP out and, well, they actually listened to us users.  Isn’t Open Source great?  It’s kinda like the free market system, but no one gets rich off it.  Or something like that.

People occasionally ask me to install XP on their new computers that came with Vista.


Many times I convince them to stick with Vista unless they have a specific problem they can’t solve and doesn’t work in Vista.  Which, frankly, is increasing once again with the prevalence of Vista 64.


Sometimes it’s a bugger to get some of the older or even current XP drivers to install with other drivers previously installed.


Many times everything works fine, but once in a while I run across the problem where no matter how many things are uninstalled and no matter what order things are re-installed something doesn’t take.  Sometimes going in and deleted the driver and registry entry, even both have been uninstalled; doesn’t work.


In which case sometimes you just have to force it to install the driver even if Windows thinks it’s not the correct one.  You know the routine – HAVE DISK, etc.  As long as you’re sure it’s the right one give it a try as a last resort.


I find that even if the person wants ONLY XP on their computer it’s best to partition it, install XP on the second partition, and make sure you have all the drivers you need first before deleting Vista.

That way you can go back to Vista to check on the exact spec of a piece of hardware, or it’s IRQ and other parameters if needed; and other comparisons.  Then once you have it all set up then you can reformat the harddrive and install XP as the primary.