Of note- I cut the name plate off the back of the Chaunts clone. 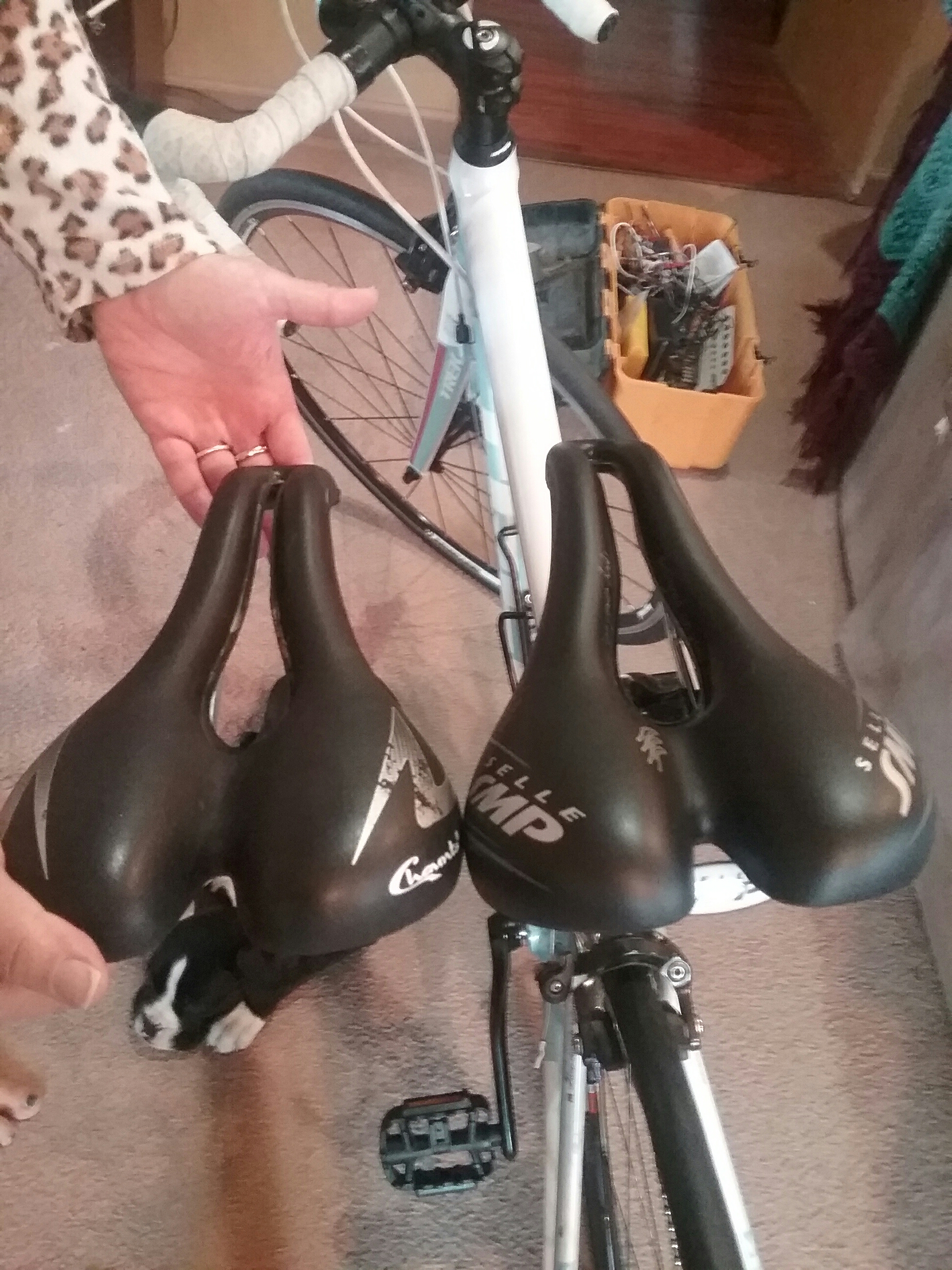 Chaunts’ clone and the Selle SMP TRK – almost an exact match.  Until you sit on it.

I was a bit skeptical about the quality of the Chaunts seat, even though it looked like exactly what I had searched for and visually seems to be a clone of the above-mentioned seats.
When I got it I was happy to see that the seat was quite nice, seemed to be fairly good quality, and visually looked like what I was searching for. The padding seemed slightly on the hard side though, but I know that this is better than being too soft.
After a few rides I had it adjusted perfectly and I found that while I liked this seat, my rear definitely was going to take a little time to get used to it – just as with any seat. This seat is perfect for any position on your bike – whether you ride upright, or down on drop bars or aero (tri) bars – both because the nose piece is angled down as well as because it has the anatomic relief slot all the way back and all the way forward so that you can ride comfortably in any position.
It also looks cool 😉
The weight is fair, it seems almost like the listed weight is higher than the seat really weighs.
The rails and construction as well as the stitching and material seem to be fairly well-done and well-made. I can’t speak to the durability of the seat but it looks like it will last a long time – except for the logo and decoration which wear off quickly.  Cosmetic only.
The downside is that the padding is probably not gel, but it is very firm so it has kept it’s shape and firmness perfectly, through multiple riders and bikes.
After a lot of time using it I still really like the Chaunts seat but the hardness had begun to bother me. It seems that over time my butt had gotten used to it but only up to a point, I eventually upgraded to the Selle SMP Extra.
My wife rode with the Chaunts seat for many miles and found it better than other seats she tried, but still found the saddle a bit too hard for long distances and moved up to the Selle SMP TRK.
As you can see in the photos the Chaunts seat looks similar to the Selle seats, and probably is the closest match to the Selle SMP TRK.
At least on quick visual inspection.  Looking closer reveals the differences in quality and material.  The Selle’s are hand-made, with real leather covers while the Chaunts is vinyl with okay-quality stitching and stapling, and with closer inspection the little details start to stand out.  Not to mention the very hard padding of the Chaunts compared to the firm but not hard padding got the Selle’s.

Chaunts seems to be a Chinese company that makes all kinds of bike seats, including clones of popular more expensive saddles.

Overall, if you are looking for a cheap seat of the anatomical variety and don’t want to pay much for it, and don’t mind a very, very firm seat than the Chaunts may be for you.  If not, go with a Selle.

See my review of the Selle SMP Extra here.