Just a quick blog entry today, on something I feel very strongly about…

I believe that declawing is unnecessary (except for the cat’s medical reason, like a tumor of the toe) and inhumane.

Some people think it’s like a manicure or trimming your own nails.  But no; it is not.  It’s a serious surgery.

Your cat’s claws are not a toenails and they’re closely adhered to the bone, so when a cat is declawed it’s actually an amputation of the last bone of each toe.

If it were done to a human being it would be like cutting off each finger at the last knuckle. 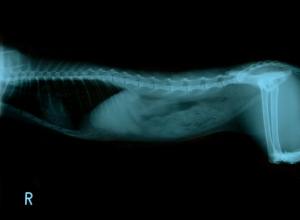 And, of course, its painful surgery, with a painful recovery period. And that recovery period also includes the entire time that the cat must be using its feet to walk, jump, and scratch in its cat litter things.  Things it does or has to do every single day. In fact the latter can sometimes cause a litterbox aversion in some cats because of the pain involved, and the lasting psychological effect of it.

Also, not only is removing the claw and bone painful and inhumane initially, but the claws are an important part of the cat’s body’s design. They use their claws to detect and stabilize their balance, it’s an important part of their life and how cats have evolved. Because of its nature this surgery alters the conformation of their feet and how they are able to balance and land when jumping, or just walking normally.

As I said above, declawing can lead to cat litter aversion or just make a cat less likely to use the litter box. It makes a cat much more likely to bite and have other behavior problems, too – directly or indirectly the result of the surgery. They can be more likely to become reclusive or aggressive too.  Changing how they walk and move can cause long-term risks of lameness and premature arthritis in the feet as well as all leg joints, including the rear ones in some cases since their gait and balance has been so drastically changed, and back problems and arthritis in their spines also.  There can be regrowth of improperly removed claws, nerve damage, and bone spurs too.

It’s as if you were forced to wear extremely uncomfortable  block-like, restrictive shoes every single second of your life – your feet, hips, spine, and whole stature would be affected. Or a more apt analogy might be to cut off all of your toes on each foot.

Some people want to justify it medically, saying that those owners with immunodeficiencies or bleeding disorders might be protected by declawing their cats. But declawing is not recommended by infectious disease specialists because the risk from scratches to these people is less than those from bites, cat litter, or fleas carried by their cats, in the first place.  And declawing can increase the chance of biting too.

My mom was easily bruised and had problems along those lines, and so she had her cat declawed and poor Katie had balance problems all of her life after that, and was much more likely to bite my mother after being declawed. Also, it became apparent when Katie got older that she was walking abnormally and probably had pain from the declawing and in parts of her body, either from her body architecture being changed or from premature arthritis. She also would fall once in a while when she was trying to jump. When my dad got his new cat he said he would never have it done to another cat, which I was very very happy about.

Some might say that declawing is an American thing, an attitude of thinking about ourselves and our furniture over what happens to the cat. In England declawing is considered “inhumane” and “unnecessary mutilation” and in many European countries it’s illegal and very uncommon or unheard of. Many parts of California it’s illegal. Countries where it’s illegal or done only for medical reasons; England, Scotland, Wales, Italy, France, Germany, Bosnia, Austria, Switzerland, Norway, Sweden, Netherlands, Northern Ireland, Japan, Ireland, Denmark, Finland, Slovenia, Portugal, Belgium, Brazil, Australia, New Zealand, Yugoslavia, Malta, Israel.

The Humane Society of the United States also opposes declawing except for rare cases when it’s necessary for medical purposes (for the cat) and the American Society for the Prevention of Cruelty to Animals strongly discourages or condemns the surgery.

It’s just so very easy to start training a cat not to scratch things, and cats usually just naturally use a scratching post on their own. Training can start as early as eight weeks, and at that time their claws can start to be trimmed.  You can use a human fingernail clipper but a better way is a very inexpensive cat claw trimmer.

Once I start trimming one of our cat’s claws the rest gather around and wait for me to do it to them and give them their treats afterward. It’s good for cats who might really dislike this to give them a reward afterward, for training purposes.

No big deal to me, no big deal to them. Hell of a lot easier and more humane than declawing.  You can see what it looks like in the first picture of this blog entry.

Really, after having trained them and providing them with scratching posts and toys (see to the left, and below)- I think their claws wouldn’t even have to be trimmed anyway, but I do it anyway.

Companies also make soft plastic caps (such as Soft Claws) that are glued to the cat’s nails and special tape on furniture for people who are too lazy to trim their cats nails and/or teach the cat what they should be scratching. 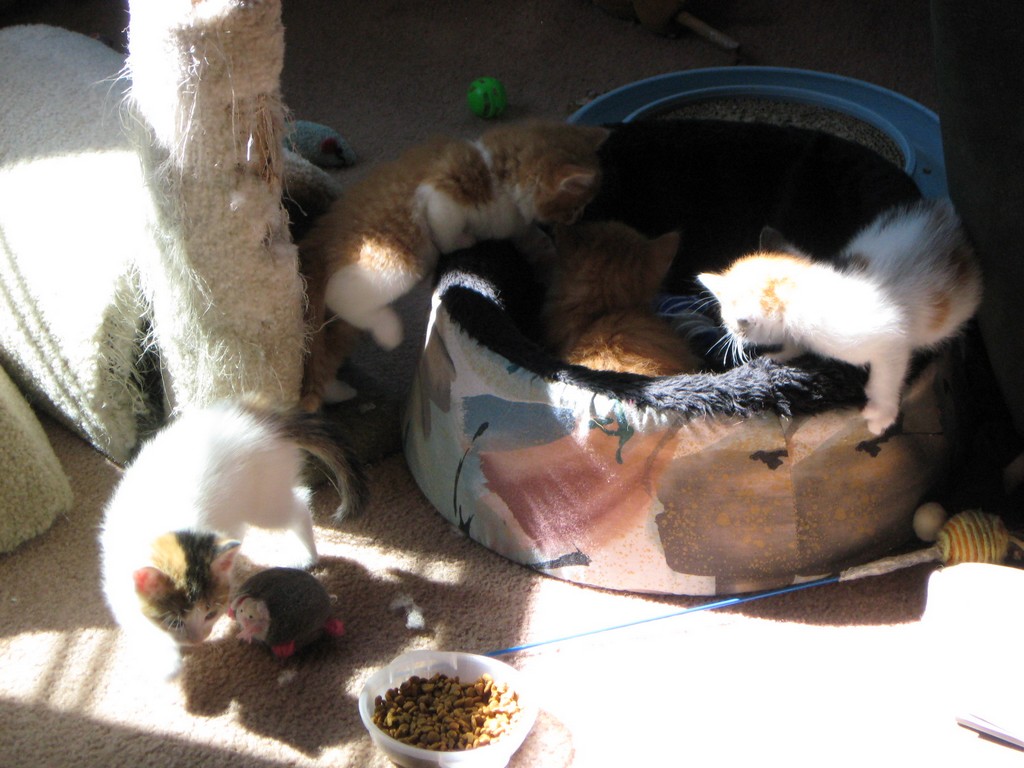 One of our well-worn scratching posts