I decided to try out the Olmstead Trail once again (see my NNY Trails page about it here, with some more pics). I hadn’t been on it for quite a while, and I had heard that it was expanded. The trail, the last time I rode on it, was a pretty good trail – hills, some rocky parts, etc., and I’d explored all the trails branching out from it, including the ones that go around the perimeter of

the zoo. I’d found the ruins of the original Public Square fountain that they were talking about restoring or something, and had even scared some Asian people who were out for a walk (the older lady actually picked the kid up and held onto him as I rode by). Actually, I’d been riding toward them so I didn’t scare them so much as they were apparently scared of me in general, even though I gave them a wide berth as I passed. Oh well.

So my wife and sister and nieces were participating in a benefit to help an Alzheimer’s walk by renting space at the benefit for selling their crafts. As we’d done the year before we loaded the craft stuff as well as my bike into Jenny’s Pontiac Aztek Rally Edition (truly a versatile vehicle, as the ads used to mention before they discontinued this vehicle).

After I helped them set up the crafts and stuff, I headed out on some of the black-topped trails to warm-up, then down onto the Olmstead Trail. 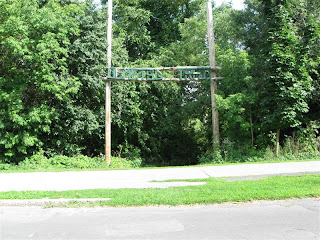 It was about the same and, once again, I scared the crap out of someone. A lady was walking along, I could just barely see her through a curve and figured if I yelled she might not hear me so I waited until I got a bit closer. Unfortunately I got a little TOO close before I yelled a hearty “Hello!”. She heard the bike; which to her possibly sounded like a stealthy approach by an attacker, at the same time I yelled. She jumped straight off the ground, did a little turn in mid-air, half-raising her hands in a purely instinctual-looking quasi-karate/quasi-defensive move. Oops, I should have yelled earlier. I apologized and she said she never saw anyone out there and hadn’t expected me. I went on my way, feeling a bit bad but still stifling a bit of a laugh – I couldn’t help it.

Finally I reached the place where the trail had previously stopped. It now continued on a single track sort of thing, lots of rocks and logs to jump and go over. Even a few places where someone made some nice mountain biking-style things to ride across. I continued on and it got challenging with hills, more stone and logs, and trees so close together that the handlebars of the bike barely fit between them.

In other words – a mountain biker’s favorite riding. I’d say it was one of the best mountain biking trails in the area that I had ridden on.

I continued for what seemed like miles. I knew I didn’t want to spend all evening and wanted to get back to the benefit in a reasonable time, but each trail leading back in the direction I wanted to go lead out onto the golf course.

Finally, I had spent a lot of time and had traveled down the hill a way, being able to see the ski area on Dry Hill, and getting further and further away. Some of the branching trails were badly maintained.

My bottles of water had even run out, I always bring enough water! Heading back would take even longer, going up the sometimes steep rough hills. And the trees were close together, cutting any bit of wind and making the trail hot as hell. I was soaked in sweat and getting kind worn out as I had biked full-speed through the whole thing to this point.

Jeez – I’m not actually 25 anymore – I realized. High time to head back.

So I took the next branching trail that led toward where I wanted to go (popping out of the woods and onto the edge of the golf course I could see the water tower, quite a ways in the distance).

Unfortunately there were some older gents standing by and leaning against their gold carts, swinging their clubs around distractedly, and discussing something that sounded suspiciously like Big Business talk. Wow, even this cliché didn’t impress me at the time.

They stared as I tried to give them lots of space, knowing I probably wasn’t exactly supposed to be there. But, well, they weren’t exactly going to catch me on their golf carts and I wasn’t doing anything destructive.

I watched for flying balls, golf carts, trotting caddies, and the like. I made my way as quickly and unobtrusively as possible toward the treeline.

At the treeline I found a trail through it, thinking I’d come out at the obstacle course area. Nope, another field of golf courses. I headed off again, occasional people glancing my way. But they didn’t seem to be awfully upset and I was keeping well away from anyone.

At the next tree line I passed by large coolers of water, possibly set out for the golfers? I wanted some real bad, being soaked in sweat as I was and no reserve water left. But I kept going, finally getting to the next treeline and finding yet another path through it. This time I was at the obstacle course and made my way back to the ‘Tek.

Anyway, great trail but if you continue on it make sure you’re in for the long-haul. Sometime I’ll go back and ride the whole thing and find out where the end comes out. Across from the other overlook perhaps? Something for another time.