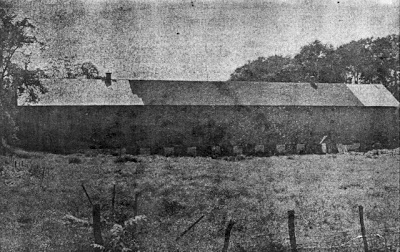 I’m interested in history and old structures, especially in the North Country. You can find my history page here, my abandoned buildings site here and more related links in the column to the right.
One of the things that’s of interest to me right now is the old Anthony farm on the road going to the Perch River Dam.

This farm was on the gravel road that goes to the Perch River Dam, the road is off from Parish Road. At one time, many years ago, this was the largest barn in Jefferson County and was of a unique design that probably isn’t anywhere else in the US (see photo at top of this entry).
The people who built the barn built it between two high hills, so it spanned the entire valley between them. Some accounts put it at two hundred fifty feet – a large barn for those days. See the photo at right; I took this from the left ramp, high on the hill and looking over the valley. If you look close you can see the opposite ramp which would have been the end of the barn on the other side.
The cows were at the very bottom in a stable, and above them was the hay loft. Above that was another floor with open sides or open spaces. On either end of the barn was a road going up the hill where the horses and a wagon with hay could be brought up, the horses and wagon would then be taken into the end of the barn and onto the upper floor, where the hay could be thrown off into the hay loft below.

An interesting and innovative design. Nearby was the house and a spring house (photo at left – more photos here), which also was used for cold storage.
There was also a large cistern behind the barn, and what I was told was that water was caught from barn eves and went into this cistern. The cistern in turn would be available to water to cows. Another reference mentions that there was some sort of system for providing this water to the house too.
Under the barn was a large drain.
All of this made out of limestones.
Some local people also make note of some other nearby things connected or loosely connected with this farm. Like a machinery barn nearer the dam (though I’ve never seen any traces of this). And another house nearby, also long gone, which at one times houses some Indians who helped with farming in the area.
Nearby is the limestone foundations of another house, a short distance down the road. I’ve always been curious about it as my father hadn’t had any info on it (when he moved here the Anthony farm was still standing and the farmer there took care of some of his heifers so he knew it well).
A person who does metal detecting contacted me via my webpages awhile back about the Glen Park amusement park and caves and such, and he contacted me again about the old Anthony Farm and the stone house nearby.
This guy takes metal detecting seriously, does lots of research and puts a lot of thought into it. I know some of the local historians probably aren’t too keen on this sort of thing, but oh well…
I told him about my work in trying to find out any info about the old house and we agreed to meet down there along with my father and his family, to do some looking around and possibly for him to get some idea of good places to metal detect down there.

So my father and I met him and his family down there. Eric and his entire family are good people, and we spent quite a few hours looking around down there. We went over the old stone foundations (photo to the left – more photos here), climbed the hill to the right ramp that went into the barn, found the foundations of the barn itself (which was new to me, see pic at very bottom of this entry) as well as the cistern (See photo below – more photos. The cistern was in a raised hill – either natural or synthetic, near the center point of the barn) and drain (both also new to me). The cistern was massive, possibly 40 feet long and eight feet wide or so. It was mostly pushed in by the state or had fallen in but there were replaces where you could climb down in if you wanted to.

I wanted to go over to the other ramp which, when I was young, could easily be gotten to as the road to it was still open. But now that area is packed with dense brush.
My father mentioned the other old house on the other side of the road but he wasn’t quite sure of where, so Eric took a quick look around without finding it. Later my father talked to a local woman who explained about where it was.
Later I went back by myself and trekked over to the ramp (pic at right, below). I put on an old t-shirt, packed my camera and phone in an old backpack so I’d be fairly “stream-lined” and threw on my shooting glasses to

protect my eyes. The brush was so dense it took me the better part of an hour to make it there. I looked around the base a bit and found a rusted out old hand saw as well as a moss-encrusted piece of wood, which I assume was part of the barn.
At the top of the ramp the brush was even worse until I got near the edge of it, where it was completely devoid of brush and only had a little grass. It was a great view, and looking closely I could see the opposite ramp – a long way across the valley. The trees and brush were thick enough where I couldn’t see the foundations of the barn below me.
I tried to bring both the old saw and piece of wood back, thinking that I would leave it laying somewhere that Eric would find the next time he came down to do some metal detecting, but the brush was so dense there was no way I could carry it out easily. I could barely get back out myself.

There were some differing measurements having to do with the length of the barn and I had intended to bring my GPS but forgot it. I thought I could grab the coords from both ends, making sure I had the best accuracy, and estimate the length down to 15 feet or so. Ugh, I hate to make another trip through the brush but I probably will end up doing it.