Home Internet & Blogs Cat Play Toy, Abuse of Interactive Websites by Users and Bias Management by the People Who Run Them, Freestufftimes.com

Cat Play Toy, Abuse of Interactive Websites by Users and Bias Management by the People Who Run Them, Freestufftimes.com 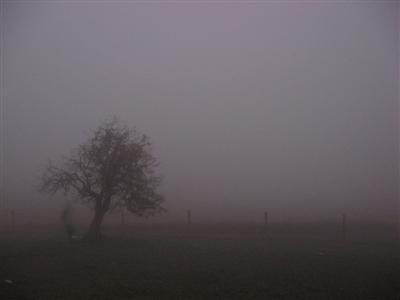 It’s amazing what you can do with some scrap wood, plastic, carpeting, hot glue, a power staple gun, and some miscellaneous tools. If we had to buy something like this in a pet store it would be kinda pricey.

The bottom piece is two scrap pieces of plywood screwed together, the large round vertical upright near the bottom is a plastic roll that wire comes on (I believe that this came from some microwave-rated cable from a wireless project I was working on); filled with stones. The middle part is a shelf from an old computer desk, the top shelf is a thick piece of scrap wood, and the upper support is an old plumbing pipe scrap. An additional support under the top shelf is a 4×4 piece of wood; a cut-off cast-off from what had been cut off for a deck stairs leg – see; it pays to keep all those small scraps if you have the room. This piece I used a hole-drill to make a long cylindrical hole through and attached the top shelf to it, then slid the pipe up through it for additional stability for the top shelf.

The whole thing is carpeted with some cast-off rug. After I coated each piece of the cat toy thingy with hot glue I stretched the carpeting and stapled it at the bottom (similar to stretching a carpet when you’re installing it), adding bits of hot glue to make sure no edges were raised and to cover any staples in case the cats got it turned over (not likely with the stones in the base).

Afterward, I steam-cleaned the carpeting as it had been stored in our basement.

Of course when I was nearly finished THEN I thought to look on the Internet for some how-to’s. None seemed to add anything as – like so many things in life – it’s pretty common-sense and straight-forward if you use your head. I really wanted some info on how to fold the corners properly but none gave me this info anyway. 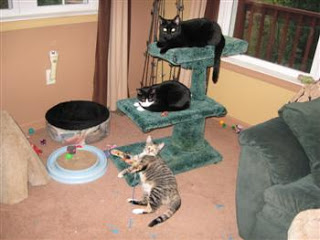 It came out well, once I figured this latter out.

In the top picture Geordi, Hoshi, and Janeway investigate it (though I thought the kittens would be the most curious – they were sleeping). I put a little cat nip on it just to make sure someone would take the first try at it – since it was still a bit moist from the carpet cleaning. I guess I hadn’t had to worry…

In the pic to the right Geordi and Hoshi are settled in for possibly a nap, while Janeway lunges and plays with a toy.

Let me ramble a bit. Sometimes I wonder – how many people can handle the ‘real’ freedom that the Internet sometimes affords us?

What percentage of the “average” (if there is such a thing) members of humankind can responsibly use the Internet without abusing the freedom and the ability to access the mass of information (and disinformation and opinion presented as fact) it provides?

Do the thousands of great benefits outweigh that one negative nasty that sometimes comes along?

I’ve run a number of interactive websites, discussion areas, webboards, and mailing lists (and still do). But after years of dealing with people abusing the freedom they are given; I’ve cut back on how many I take care of directly, or indirectly, or help with.

After awhile it wore me down, and occasionally it affected my reputation on the Internet as well as in real life when I took the brunt of what someone else posted.  Occasionally someone would cause some retribution against me; apparently for running the system – instead of the person who caused the trouble in the first place. I guess it shouldn’t surprise me when people are, well, just people – but it does.

Give people a place with a little freedom and a certain percentage seem disposed to abuse it, and then the person providing that very place gets blamed by another percentage. And on top of that – a good portion of the time when you get sick of it and want to move on to other pursuits you get blamed for that too, sometimes by the very people who first-hand saw all the work you put into it. Sheez, you can’t win. You just can’t win sometimes.

I think we can see this with large sites like Wikipedia too. There’s a certain attitude by some of their editors that is showing through – they’re getting frayed from all the BS they have to put up with. People editing competitor’s entries with false info, people with an ax to grind against a particular subject/website/tv show/person/etc, users who just plain want to cause chaos or post graffiti.

It must get overwhelming – and I sympathize. Though there seems to be a lot of bias and lack of understanding among some of the editors there.

Humans being what we are – biases, bad days, personal grudges, and all the baggage that goes along with that gets mixed in. Same thing I saw among the people helping with running various webboards and mailing lists I had been/are a part of as well as other interactive websites I am just a member of.

What’s the answer? Someone trained in impartiality, like a judge? Best solution, but not practical. And even the best judges and debaters are influenced by their emotions sometimes.

Do you like free stuff? Heck, who doesn’t? I’ve been receiving this newsletter from Freestufftimes.com, which lists all kinds of free contests and free items you can request on various pages across the Internet. Some good stuff out there, and companies are willing to send it to you for free! The newsletter has new stuff each day, and 99% of the time it’s all updated and valid; I’ve gotten a few interesting things over time.

Right now they have a contest going. And, well, by posting this here I’m entered. Who doesn’t like free stuff, indeed?

Hey, when I said this blog would be full of random stuff you did believe me, right?