Bored on the Treadmill, Indoor Bike Trainer, Exercise Bike, Elliptical, or Rowing Machine? Get a Chromecast!

If you’re like me you might become bored to death of running on the treadmill, indoor bike trainer, exercise bike, rowing machine, and elliptical.

I especially find myself not able to finish very many miles on the treadmill (a Sole F63 – review here) during the indoor months – and I’m not a person who is easily bored.

Our Schwinn 130 bike (review here) and elliptical are not much better, though it’s possible to use a tablet on both devices while exercising on them.  The treadmill; not so much.

I picked up a number of bike training videos (there are many) as well as discovered many excellent training and scenery videos on YouTube and they all generally worked well for biking, using my laptop connected to the tv in our exercise room, though really I much prefer my own music while doing them.

That was easily alleviated by opening YouTube in one tab in Chrome, finding and playing the video I wanted to play and then muting it in YouTube, opening another tab and playing Pandora or whatever music service I wanted to use, or MP3’s off the network.

But what a pain in the rear to take my laptop down to the exercise room, set up a tray table, plug everything in, boot it out of hibernation, and set everything up.

I was determined to make it easier, and also so that I didn’t have to lug my laptop around.  Technology should make things easier and not harder.

An old computer helped, but it was pretty decrepit and I didn’t want to spare any of my good computers for just this one purpose.  Buying a used one off Craigslist or some place was an alternative.

For around $30 it’s hard to beat it, despite some limitations.  It’s pretty simple to use – plug it into the HDMI port on a TV, plug the power blister into a wall outlet and the micro-

USB plug into the back of the Chromecast, turn on the tv to the proper HDMI port, and control the Chromecast with your Android device, IOS device, or a Chrome tab on your computer.

The Chromecast works great – you can easily carry it from TV to TV, it takes little effort to just plug it and it’s power supply in and started ‘casting from your tablet or smartphone.  Listen to music off the Internet, use an app that will access your MP3’s and movies on your tablet, smartphone, or network, stream video off YouTube, etc.

But what I wanted to do was a bit more than just playing one thing though, and Chromecast doesn’t exactly multitask.

I thought at first I could mirror my tablet’s screen to the Chromecast and run YouTube with mute on and Pandora in the background, something like I had done with my computer.  That didn’t exactly work as the Youtube app has no mute, and muting the whole tablet will mute Pandora’s output too.

I thought that I could just mute the TV and plug my surround sound receiver into the tablet.  That didn’t work right, because the YouTube video would stop every time I tried to play Pandora, and every time I started the YouTube video and tried to play Pandora from the notification bar YouTube stopped.  At least that’s the way it worked on my Asus MiMO.

So what I did was stopped the ‘casting of my tablet’s screen to Chromecast and used the YouTube app itself, pressing the ‘cast button (seen to the right here) to send the mini-app to Chromecast where it would run semi-independently of the tablet (the YouTube app on the tablet would then be like a remote control).  Then it was a simple matter to switch to the Pandora app and start playing what I desired.  This of course plays through an input on the surround sound receiver plugged into the headphone jack on the tablet, the sound on the tv muted. 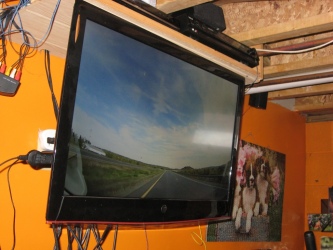 TV with Chromecast plugged in

Unfortunately the whole process wasn’t quite as easy to invoke as I had hoped.  Perhaps there is an easier way that someone could suggest, or that I may discover.  But for now it’s just a few steps to get it set up and running as I want it to be.

And wow – does it make a run, bike, or elliptical session much more interesting and enjoyable.  I even notice that my heart-rate was lower than when I normally run on the treadmill, by an amazing ten BPM.  Possibly more relaxed, more content, more able to concentrate on just running, not sure?

Below you can see two quick YouTube videos I made, sorry for the dark conditions.

And don’t forget to read my review of the Chromecast here.

Watch a quick video of the process: