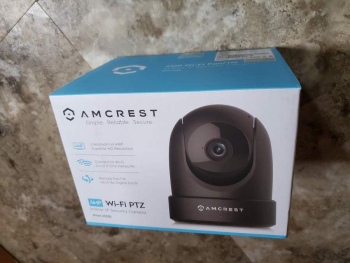 This camera is made by Amcrest, which is the same company as the manufacturer of the ASH22-W Outdoor Smart Security Camera that I reviewed in my last posting.

Once again I am impressed with this company’s security camera and its options and quality.  I don’t know how they do it but this camera, as well as the previous one that I reviewed, they seem to be something that you would normally pay five times as much for.

The box looks nice, showing a photo of the camera and some of the camera’s abilities and specs, inside are all of the parts with each in its own individually wrapped baggies and packed in cardboard dividers and boxes.  The camera itself is cushioned with cardboard and formed foam protection, the lens protected with a plastic shield.

You get the box, a nice hinging wall mount, screws and anchors, a network cable, the power cable with a power plug on one end and a USB on the other, the USB wall-plug transformer, a warranty registration info card, a firmware update reminder, an FCC regulatory info card, and the installation booklet.

The camera itself looks good quality and the typical configuration for indoor security cameras, a nice quality plastic enclosure and not too large, but not so small as to be unobtrusive, either. This review is for the black one but there is also a white model which is identical except for the color.

This looks similar to other security cameras of this type, including commercial ones.  There’s a roundish base, and the servo-powered camera dome at the top.  On the rear of the camera dome is a speaker, surprisingly loud for a small thing on the backside of the camera.

The rear of the base has the power jack, audio out, audio, in, SD card slot, and the ethernet jack.  And an indicator light, also on the rear.

Of note here – this is USB-powered, there is no battery of course.

The bottom has four small rubber feet and a threaded hole. Same threads as a regular camera tripod.  This threads into the articulated base, and the camera can be positioned in any direction on this base.  The hinged section adjusts widely, with notched sections along the range of adjustments to hold it in place securely.  The other section of the hinged base has two screw-holes, the screws and anchors are included with the camera.  The camera CAN be mounted upside down easily with a ‘flip’ option in the app.

Size is around 4.8 inches tall and 4 inches wide and it’s quite light.

And on the base of the front is a small microphone pinhole.  The microphone is very sensitive, amazingly so.

I want to make note here that this camera is NOT an outdoor camera and should only be used indoors and in totally dry, none-dusty conditions.

There are a couple of different network installation methods, depending on which camera (the manual seems to cover a couple) and whether you are using WiFi (either 2.4 Ghz or 5 Ghz) or an Ethernet cable and these are covered very well, from beginning to end, in the manual – unlike many pieces of electronics.

To set this camera up you need to install the Amcrest View Pro app for Android or for IOS and then follow the directions in the manual, which involves plugging the camera in, and scanning its QR code (on the bottom) with the app, and following the directions to set it up.  I won’t bother going through the process here as the app expertly guides you along.

You can let the camera connect to your network and your router will assign an IP but ideally; you might consider assigning a static IP to it in case of a router reset, power failure, etc which might cause your router to assign the camera a different IP. 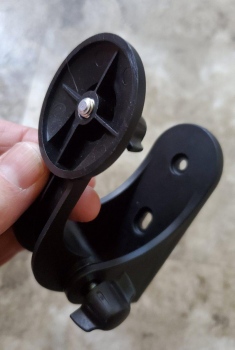 Amcrest also has additional software that you can download  – for Windows, Mac, IOS, and Android.  If you want a plethora of more options you can find them on the additional software if needed, though the regular user probably will have no need for anything additional.  But this software is very useful if you want to get in and save video or photos to a harddrive, FTP, email yourself or use other advanced things.  And the options are impressive, great stuff!

Also, since this is an IP camera it also works with third-party software like Blue Iris, though sometimes you must pick another Amcrest camera or do a little experimenting to get the right one if the software requires a certain setting.

And of course the camera works fine with Amazon’s Alexa and Echo Show.

I had a bit of a problem with the app finding the camera and had to re-install the app, but once that was done it worked fine.  I believe this had to do with using different routers throughout my house and having my phone connected to the router which was NOT the one I was putting the camera on.  So make sure you follow the directions the first time.

With this camera I did not try the ethernet wired network cable option and used only WiFi.  But the wired ethernet cable method looks as straightforward as setting up using WiFi.

For my set up I used WiFi as mentioned above, and the phone emitted a tone that the camera picked up to sync.  Quick and easy and the camera was connected to the app on my phone.

I also installed the Amcrest View Pro app on my wife’s phone and set up was also just as quick and easy, easier than my first time with my phone as I did not need to sync it with the tone as it was already set up.

The app is excellent, very refined and has all of the features the normal user would want, by far.  Including notifications from motion, the settings for sensitivity accessible in the app or even more motion detection settings on the downloadable software.

The app also works with the previously reviewed ASH22-W outdoor camera from Amcrest and live views can be cycled between them easily, as well as quick access to live audio and saved video from motion detection.  Everything works seamlessly.

Video is normally saved to an SD card inserted into the camera, but Amcrest also offers Cloud storage or you can set up a DVR/NVR on a computer through their software, or use a third party piece of software, or access things through a browser extension. Notifications can show footage and of course, let you have a two-way conversation if needed.  The speaker is on the back of the unit but still is easily heard in even a good-sized room.

Quality is excellent and can be really zoomed in for a better review, and the pan, tilt, and zoom work great – with a 360-degree pan and 90-degree tilt.  It is easily controlled from the app via swiping with your finger, or pinch zoom.  The servos that control the movement are not completely silent but they are very quiet so they won’t scare your animals, or be heard if you don’t want them to be.

And night vision is especially impressive, using IR emitters and the low light sensor and reaching the other side of a room thirty-two feet wide or so.

The camera itself is 4 MP with a 120-degree wide-angle lens and can record video at 20 FPS.  The video or still captures can be zoomed quite a lot (16x digital zoom) and is

high enough quality to keep tabs on individual items in your home, as well as pets.

Video is encrypted through your WiFi as well as through the Internet to your app, using modern encryption methods.

The camera even has a one-year warranty, something you don’t see from some manufacturers anymore.

So I gotta say – between this and the previous camera I reviewed I am very happy and impressed with the offerings from this computer and their cameras.  I would expect to pay a lot more for the quality and options that these cameras and software offer.  In fact I never thought I’d have cameras this good without paying and arm and a leg for them.

If you are in the market for an indoor security camera to add to your system or just to monitor things on its own check out the Amcrest Indoor WiFi Security Camera IP4M-1051B 4MP with pan/tilt, night vision and two-way audio.